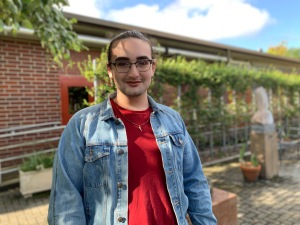 It is so rare that a poem leaves me with questions that I don’t mind asking. When I read Marin Hart’s “Portrait with House” during the initial reads process, I was shocked by the delicacy and precision with which the impulses were executed. I finished and wondered what exactly I had just experienced, as this poem is one of those that is felt before it is understood.

Hart’s masterful display of ambiguity is a genuine treat—it leaves us with a number of implications, it keeps us invested, and, most importantly, it conjures the kind of atmosphere that is impossible to forget. The nuances—little moments that make more sense than they linguistically should—sharpen the mood into a very evocative little dagger of feeling.

This poem summons “an ancestor real like wind,” and it is in its own right real like wind. The moves and turns are swift and not themselves seen, but they are deeply internalized. By the final, sinking line, we understand clearly that this poem is a well-oiled, complex, highly efficient machine with a sum greater than its parts. The lines depend on one another in this way: they all do work together, and they do it so cleanly that we’re left wondering what we missed in the equation.

I was very excited to showcase this poem because it communicates subliminally the raison d’être of Élan so well. Youth writers, in their own way, are making art that demonstrates craft in the traditional sense that deserves voice. A thing I love about Élan is that there is no aspect of the publication that feels “teen” at all. However, we don’t mind donning that tag—even if it is a misnomer of the work inside—because we understand how special and beautiful it is to be teen and art-making and alive.

The gift in this poem is that it truly means something different to every reader, and few poems have the ability of universal transference while retaining their power and sparing nothing. What a quiet storm this poem is.