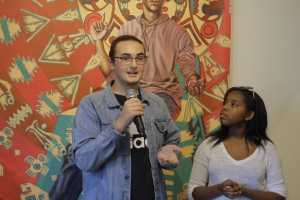 The most rewarding parts of being on the staff of Élan, surprisingly enough, are the ones that involve projects that connect to the literary and artistic community of Jacksonville beyond the scope of the school out of which we are based. As nice as the work we do for Douglas Anderson is, that world is a microcosm unto itself, and it has an insular feeling as all schools have to some extent. Élan, however, has made efforts to broaden its impact as an entity. We are not relegated to just the school with which we are affiliated—we gladly extend our reach into the city itself. This extension makes the work that we do feel a little bit more real. When we have the power to step outside of the school bounds and engage with the community as an independent entity, there is somewhat of an affirmation of our editorial work.

Last year, Élan and Yellow House, a local project stewarded by Hope McMath, had a wonderful collaboration. Artists and writers published in the magazine were given the opportunity to have their work displayed in a gallery installation at Yellow House. In the subsequent weeks that Yellow House hosted this beautiful gallery, they hosted an event for young writers in the community, a family event that would allow both Élan and Yellow House to touch base with our youth and actively engage such writers in a meaningful way. Although at this point I was not on the Élan staff, I did get to collaborate with staff members as the co-head of the Douglas Anderson Spoken Word Club. It was my pleasure to conduct with my fellow co-head (Ashley Chatmon, now Junior Marketing Editor of Élan) a few spoken word exercises to expose the crowd to a new form of expression. Spoken word is medium with which many young writers are unfamiliar, so it was a great honor to be the ones to introduce the form to a new crowd.

This experience meant a lot to me because it showed me how creatively a space can be used and how such a space can be used to meaningfully interact with the community around us. It taught me the power of community outreach! To stand in front of a crowd of completely new, young faces and discuss writing is a privilege that I now greatly treasure. This means a lot to me as an artist—if I had been say half my age and been told about spoken word and its endless possibilities, I’d have been doing what I do now for a lot longer. It is tremendously endearing to be that person for somebody, and I’m more than glad that Élan was the intermediary for that interaction.