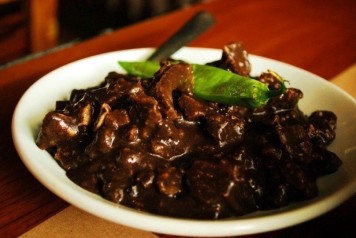 I started writing in first grade because it was fun. I can recall several times where my teacher would push back the beginning of Writers’ Workshop because the class preferred free time. I’d be the only one reminding her that writing time should’ve already started, and whoever was close enough to hear my nagging would groan and spread the news.

The earliest pieces I wrote were memoirs because I didn’t know how to do anything else. For most of first grade, I wrote about the trip to the Philippines I had the summer before. In a way that parallels youth, I see these pieces as untainted. Although my first work focused on eating at a Filipino McDonald’s (and enjoying spaghetti and chicken with rice) while a beggar stared from the other side of my family’s window seat, I didn’t know much to poverty. Instead my memoir focused on the uncomfortable experienced of being watched by a filthy man, and my mother’s decision to give him some money.

As I write this, I’m actually remembering his appearance again, and how heavy his eyes were. The skin around them swelled—muscle and crust layered with dumi. Spots decorated his wrinkles, and what shocked me most then and now is that his eyes were blue. Beneath the ragged hair and stained, tattered cloths, he was mestizo. Mixed people were especially desirable in the Philippines (not unlike other Asian countries), yet here he was, desperate enough to stare without shame.

It’s this type of disconnect and grotesque imagery that I feel carries my fiction today. Both fiction pieces I’ve written so far this year play with distance and disgust. The latest, “Dinuguan,” focuses on a woman with heart cancer, who—in increasing desperation—buys pork blood, spills it, and licks it off the sidewalk. That’s the gist of it. Trust me when I say it’s a lot deeper.

In particular, this piece uses heavy description of the pork blood (the main ingredient of the Filipino delicacy the piece is named after) to convey the hopelessness the woman refuses to accept. For example—“Cold slips through her lips—a coagulated mass sinks between teeth and spreads bitter, salty pangs over her tongue. Its grittiness sinks into her throat. She coughs ragged, old and fresh blood foaming together.”

I’ve noticed that both my first and most recent piece focus on my heritage, which is interesting. In all honesty, after the memoirs of elementary school, I didn’t revisit my heritage until my ninth grade personal essays. And even then, I didn’t utilize it again until this year. It’s actually my mission to use more personal details in my pieces this year. I’ve got a good grasp on emoting through imagery and diction, and that extra layer of vulnerability will leave a bigger emotional punch from writer to reader.