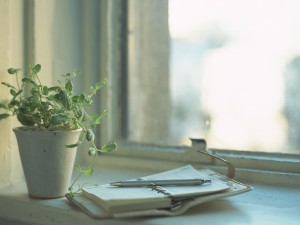 As a writer, a new year can mean finally writing that idea that has been swirling around in your head for a while or taking a closer look at the conventions you put into your pieces. Since January is the first month of the year, why not start working at the beginning on beginnings?

The beginning of a story or a poem needs to hook the reader- but not like the hooks taught in elementary school English class. How you start a piece conveys everything about where the piece will or can go. In my work, I strive to make my openings memorable, and looking at what other writers have started with can be the most helpful thing. In Water for Elephants by Sara Gruen the prologue opens with the image of three people standing under a greasy awning. This image sets the tone for the lifestyle and events that are to come for the main character. It is probably one of the most common ways I and other writers start but it’s a strikingly simple mix of images. But some stories call for a more drastic opening. Albert Camus opens his novel the Stranger with the simple sentence “Maman died today.” This immediately grabs the readers’ attention. Who doesn’t want to suck a reader in with only three words? Sometimes the beginning of a piece of writing makes you stop and process a new outlook. My favorite poet, Jack Gilbert, starts his poem Falling and Flying with the line “Everyone forgets that Icarus also flew.” It makes you look at the age old story of Icarus in a new light and before shipping you off into his insightful poem.

With 2015 just beginning, why not stop and think about the beginning and maybe even put a more interesting spin to it.